As a cooperation between Greenpeace Slovakia, cultural event Medzicentrum and Stanica, Žilina several works related with life of bees were created. Cité Radieuse is a fully working reconstructed beehive that resembles one of the bloc of flats situated close to Stanica Zárečie cultural nod in Žilina.
The society of bees was often compared to life of humans and used as a symbol for a perfect, utopian society, where the individual serves a greater purpose of the whole - a state, a nation. Many architects used beehives as a reference - some influenced by organic shape of natural beehives, other by those, created by man.
One of the first apartment buildings was a concept by Le Corbusier, originally called Honeycomb apartments.  Some years later, this idea inspired growing building construction for a "new man" in Eastern bloc socialist countries. Some of the propaganda posters even featured bees as a symbol for construction of a new future.
The assotiation with dictatorship propaganda was possiblz a reason, whz Le Corbusier and other functionalist architects abandoned the szmbolics of the bees.
A beekeeper builds a beehives for his bees to produce honey and other bee material. Symbolically he rents a space to his bee families. In a similar way a socialist state rented the flats of these uniform buildings to it's citizens.
A second part of the project was an experimental documentary/animation movie about the dangers, caused by humans, bees face today. A well known beekeeper and maintainer of a beekeeper's museum in Slovakia talks in this movie about a fragile, critical situation of bees today and secondary - humans - as we are completely dependent on this little creatures for our own survival.
Cité Radieuse is a famous building of Le Corbusier in Marseille. A vibrating, shining building that works serves to the unifying community - that is also the vision of a life of the bees in this small beehive.
Last part of the project was a table game for participants at the event Medzicentrum in Žilina, 2015. Created together with the artist Daniela Krajčová, it's aim was to popularise the knowledge about bees, beekeeping and environmantal dangers, they are facing. 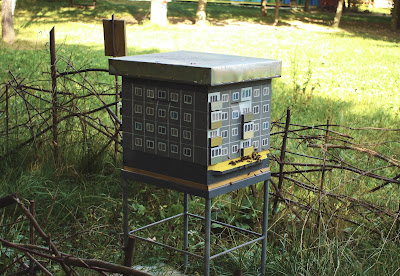 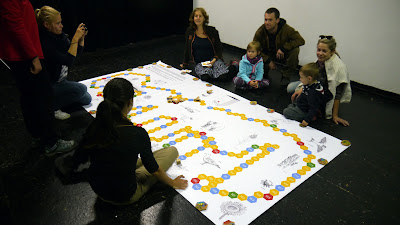 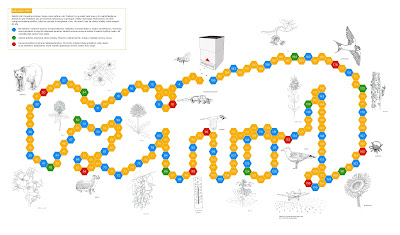